KDDI Corporation subsidiary KDDI Deutschland (Managing Directors: Béla Waldhauser, Hiroaki Miyazaki), as part of the expansion of its corporate-oriented business within the Federal Republic of Germany, opened a branch office in Munich on April 1, 2021. The new office becomes the third KDDI-affiliated location in Germany, following the offices in Dusseldorf and Frankfurt.

With a population of over a million people, Munich is the third largest city of Germany, which is itself the center of European economics. Munich’s per-year growth of Japanese company entry is 4.5%, the highest in the country. Furthermore, Munich is the site of the headquarters of seven major German global corporations and forms the largest economic urban center in Germany, with a focus on high-tech industries. It is also geographically connected with Centeral Eastern Europe, and as a traditional area for the manufacturing industry, over 91,000 companies, primarily mid- and small size, are active there. In recent years many startup companies have begun in Munich, and successful collaborations between the industrial and academic sectors have produced use cases of the latest in IT. 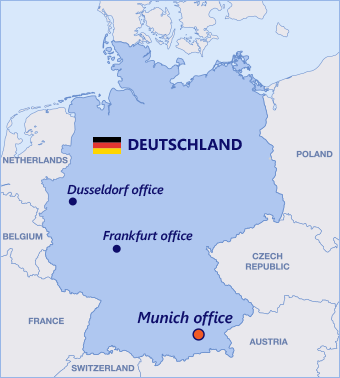 The establishment of the new office will strengthen KDDI Deutschland’s ability to support customers entering the markets of South Germany and Central Eastern Europe, helping those customers expand their businesses. Furthermore, as a new base of open innovation in Europe, our Munich office will work with partners involved with work automation and efficiency improvements, primarily in the manufacturing industry, and through the provision of the innovative ideas and advanced technology of startups, as well as the technical support of the KDDI group, we will work with customers to create new business, and work to solve issues such as adapting to the new normal, addressing aging IT systems, and solving personnel shortages.

Going forward, KDDI Deutschland will continue to provide strong support for corporate customers in their global business developments and the creation of new value by providing IT infrastructure construciton, maintenance and operation for customers‘ factories and offices in Germany and Central Eastern Europe.
The establishment of the Munich office brings KDDI’s global locations outside of Japan to 107, located in 63 cities across 28 countries and areas.